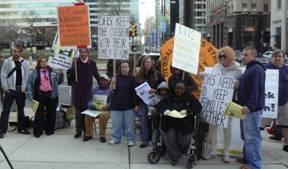 West Side, City Hall, 15th & Market St
near the Tech Tent
Look for our big sign, DHS – Give Us Back Our Children

Kiki Axelsson from Women Against Rape/UK and
the Crossroads Women’s Center, London England

philly@globalwomenstrike.net
Event sponsored by DHS – Give Us Back Our Children, Every Mother is a Working Mother Network, Global Women’s Strike/Phila & Women of Color in the GWS, and Payday men’s network.

We’ll be passing the hat to cover expenses and to make a donation to Occupy Philadelphia.

DHS-Give Us Back Our Children is a self-help multi-racial action and support group of mothers, grandmothers, other family members, former social workers, foster parents & supporters working together against unjust removal of children from their families by the Philadelphia Department of Human Services. Children are often snatched not because of abuse and neglect but because of poverty, racism & sexism. Children of color are more likely to be taken, stay in protective custody longer and never to return to their parents. We have a sister organization DCFS-Give Us Back Our Children in Los Angeles and are part of a national movement. website

Occupy Philadelphia came together beginning October 6, 2011 to “stand in solidarity with our brothers and sisters occupying Wall Street, speak out against corporate greed and corruption in economic politics”.  facebook, website

We are honored that our film, DHS Give Us Back Our Children, was selected to screen at your film festival October 14-16. It tells the stories of mothers and others in Philadelphia PA coming together to reclaim children from the foster care industry, and the devastating impact on children who were taken because of poverty, sexism, racism or a combination of these. Film festivals like yours are one way these stories are made public and are instrumental, as your theme says, in Changing the World One Story at a Time!

Since we have pledged to honor the boycott of the state of Georgia following the execution of Troy Davis, we will not be participating in the festival. We also wholeheartedly honor the boycott of GA called earlier by immigrant rights groups in opposition to GA House Bill 87 and the boycott of Coca Cola products (headquartered in Atlanta) because of violence against trade union organizers at Coke plants in Colombia and elsewhere. We proudly follow the great tradition of the Montgomery Bus Boycott [that was Alabama] which gave so much strength and direction to the civil rights movement.

We were profoundly and deeply shocked, saddened and horrified at the murder of an innocent man by the state of Georgia. Many of us have either been in prison or have or had children, partners, siblings, parents and other loved ones inside. We campaigned vigorously for Troy Davis and continue to campaign against miscarriages of justice, including that of Mumia Abu-Jamal, a journalist who was framed for murder to stop his reporting the crimes of the police. Many of us have opposed the “mass incarceration” of our youth, particular youth of color, on a personal and public level, and spent endless hours going to court or travelling to prisons to provide support and loving care. One of the reasons we have fought so hard against unjust placement of kids in foster care is because we know it is a highway to prison for our children. Like Troy Davis, we know what it feels like to be presumed guilty, and have often heard the refrain “well, they must have done something wrong.”

With that in mind, when we heard the moving plea of Wesley Boyd on Democracy Now! just after the execution saying, “Don’t come to Georgia, don’t buy Georgia peaches, don’t buy Georgia pecans, the whole world, don’t buy anything with Georgia.” We chose to honor that. We know that Michael Moore and others are also calling for and participating in a boycott. As Troy Davis’s sister said, “This fight is going to continue. We’re going to turn all of that on Georgia’s ear, and shame the state with boycotts and things like that.”

We, along with at least a million others, urgently called, wrote, emailed, faxed, tweeted, petitioned and protested the murder of Troy Davis. Some of us blocked traffic in Philadelphia at 7pm on September 21st, the scheduled execution time, until policemen (and women) used their bikes to push us to the side. We know that an unprecedented national and international movement was built, and that people have vowed to continue and step up the pressure until the death penalty is abolished and there is an end to mass incarceration and racist travesties of justice.

We request that the Urban Mediamakers Festival respect our position, withdraw our film and help publicize why. Any proceeds from Georgia sales will go to work against miscarriages of justice, the death penalty, mass incarceration of our youth, and in support of the CA prison hunger strikers and their demands, along with making the film available to those who cannot otherwise afford to pay. Thank you for your kind understanding.

Every Mother is a Working Mother Network
For more information or to order the film, www.everymothernetwork.net
215-848-1120    philly@allwomencount.net    PO Box 11795, Philadelphia PA 19101