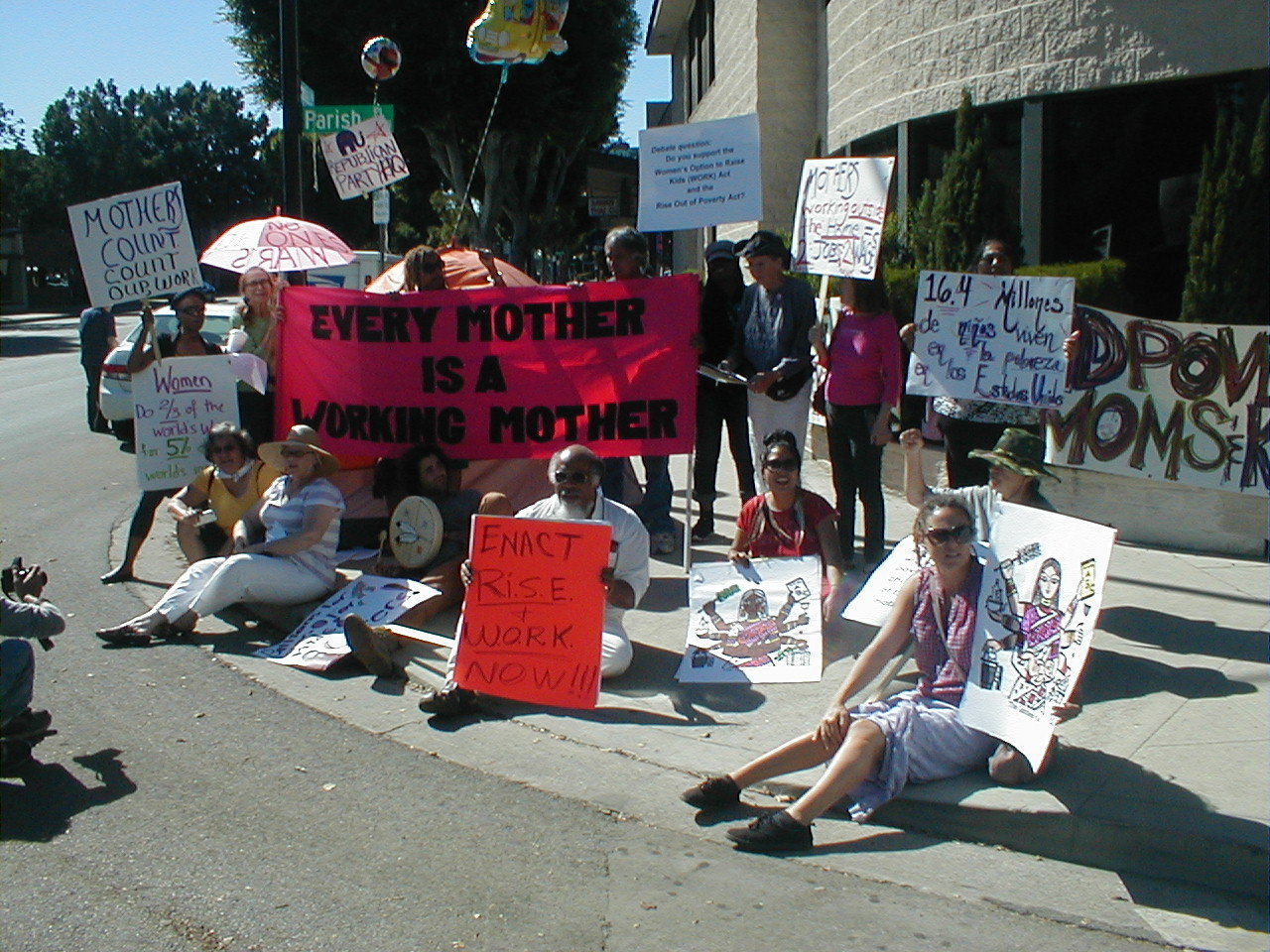 A multiracial group of mothers, children, other caregivers, occupiers, women and men including older people and youth, held a Speakout and Protest outside the Republican Party Headquarters in Burbank, California on Monday October 15th the eve of the October 16th next presidential debate.

Women of Color in Global Women’s Strike speaks out, with rep of Martin Luther King Movement and OccupytheHood

Moms and Grandmoms speak out

Member of DCFS Give Us Back Our Children speaks out, in Spanish w translation

Petition to the US Congress: End poverty of mothers & children. Recognize caregiving work. Support the WORK and the RISE Acts.

What: local actions in 12 US cities to launch campaign for recognition of caregiving work and to end the poverty of mothers and children
When: Monday October 15, the day before the 2nd presidential debate
From: Global Women’s Strike and Every Mother is a Working Mother Network
Contact: 215-848-1120 philly@allwomencount.net everymothernetwork.net globalwomenstrike.net

Moms and other caregivers say to Prez candidates, “Yes, every mother is a working mother. What will you do to recognize the real value of our work and end the poverty of children and their hard-working mothers?”

On the eve of the second presidential debate, mothers and other caregivers are holding coordinated actions in 12 US cities to launch a campaign for recognition of caregiving work and an end to the immoral and shocking poverty of mothers and children. The campaigners are calling for the enactment of the Women’s Option to Raise Kids Act (WORK Act HR4379) introduced by Rep Pete Stark (D-California) and the Rise Out of Poverty Act (RISE Act HR3573) introduced by Rep Gwen Moore (D-Wisconsin, herself a former welfare mother). The bills recognize the work of mothers and call for resources for no and low-income mothers.

They want Mitt Romney and President Obama to answer the following question:

Mr. Romney, in defending your wife you said, “every mother is a working mother;” President Obama, you said “being a mom is the hardest job there is”. What resources will you make available so that low income mothers have the same choice as wealthy women to raise their own children rather than being forced to work outside the home and have someone else care for their children? Will you be supporting the RISE and WORK Acts?

Every Mother is A Working Mother is a broad-based multi-racial network of groups of mothers, grandmothers, fathers and other caregivers from a wide spectrum of communities – single moms on welfare, low income families who have lost children to foster care, breastfeeding advocates, nurses, seniors, people with disabilities or caring for loved ones with disabilities including veterans, teachers, women who have been criminalized by poverty including sex workers and former prisoners, trade unionists, pay equity activists, LGBT, farmers, small business owners and others. They say, “It is time for politicians, right, left and center, to stop talking out of both sides of their mouths, paying lip service to the work of mothers while calling poor moms moochers and scroungers, and cutting lifeline resources for moms with the least. Women are being forced to stay in abusive relationships or to take low waged work regardless of the impact on their children. From social security, where years raising children are considered our “zero years”, to welfare reform to lack of pay equity in waged work, mothers are penalized. We say every mother is a working mother and every child is entitled to care! We are all Moms in Chief and we all deserve support!

The campaign is backed with an impressive array of statistics showing how mothers work the hardest, doing the double and triple day while getting the least for it, summed up by the ILO statistic that women do 2/3 of the world’s work for 5% of the income. There are 16.4 million children living in poverty in the rich USA; 7.4 million in extreme poverty.

The Global Women’s Strike has brought its international network to build this campaign because wherever we are, caregivers work the hardest and have least access to resources. In the Global South women’s workload and poverty are even heavier and our contributions to the global economy ignored.

Petition to the US Congress: End poverty of mothers & children. Recognize caregiving work. Support the WORK and the RISE Acts.

In 1911 welfare (“the mothers’ pension”) was introduced to enable mothers without income to keep their children.

In 1959 welfare was to “make it possible for a mother to choose between staying at home to care for her children and taking a job.”

In 1977 the first congressionally mandated Conference on Women, with elected representatives from all states and US territories, agreed that: “The elimination of poverty must be a priority for all those working for equal rights for women . . . And just as with other workers, homemakers receiving income transfer payments should be afforded the dignity of having that payment called a wage, not welfare.”

In 1995 the UN World Conference on Women agreed that national accounts should include the value of caregiving work.

In 2007 the US Centers for Disease Control and Prevention agreed that “Improving the health of mothers and their children is a primary goal” and that “protecting, promoting and supporting breastfeeding is a key strategy towards this goal.”

These decisions are still to be implemented. Poverty has increased. While the US is the richest country in the world with the biggest military budget, nearly 1 in 2 people (150 million people) live in poverty or low income (latest US census). 26.6% of single parent families live in poverty (44% of Black families; 33.4% Latino/Hispanic; 22% white). Yet access to welfare has dropped from 68% of low income families in 1996 to 27% in 2010. Infant and child mortality has increased. So has domestic and sexual violence. Single mothers and their children are the fastest rising population of homeless people and of families with zero income. Nearly half of single mothers on welfare have a disability or a child with a disability. Mothers on Workfare are least likely to breastfeed. Mothers are the fastest rising population of prisoners.

We are calling for the reintroduction of the WORK (Women’s Option to Raise Kids) Act (introduced by former Rep. Pete Stark, D-CA), which would abolish Workfare requirements for single parents of children under three.

Being a mother, a caregiver (motherwork), is hard work, whether we are raising one or several children, breastfeeding or caring for a child with physical or emotional disabilities.  Some of us are also caring for a veteran with PTSD or other war related illnesses, or for an elder family member.  Many of us are working a double day: unwaged caregiving combined with paid work, usually low paid work.  Although many of us press men to share caregiving work, it is still overwhelmingly done by women.

Why shouldn’t all mothers have the same right as millionaire moms to raise our own children?  Low income mothers are doing “the hardest job there is”, minus access to the money and servants.  Yet we are vilified & lied about as lazy dependent moochers. Without the unwaged and low waged farm work, justice and other volunteer work we do, entire communities and religious institutions could not function. Does all that work count for nothing?

Now, for the first time in decades there is a piece of legislation and one that we want reintroduced that recognize the work of mothers.

The RISE Out of Poverty (RISE) Act (H.R. 3486, Gwen Moore, D-WI) would make ending child poverty the primary goal of TANF. The Women’s Option to Raise Kids (WORK) Act which needs to be reintroduced into Congress (was introduced in the last Congress by former Congressman Pete Stark, D- CA). WORK recognized that raising children is vital work, and would give mothers the option of raising young children fulltime at home under current welfare legislation (TANF).  The two bills together are a power for mothers everywhere, whether we are low income or not. They begin to finally value and provide resources for mothers and to undermine the growing poverty of women and children.

We hope other elected officials will get behind these bills, support RISE and reintroduce WORK! It is time for politicians of the right, left and center to stop talking out of both sides of their mouths, paying lip-service to the work of mothers while cutting resources for moms with the least. None of them would be there without the work of mothers. They need to stop pretending that work is only what is done outside the home, & the demand that mothers “get a job” be our only option.

From social security (where our years raising children are called our “zero years”, increasing our chances of being impoverished as we age), to welfare (TANF) policies, to lack of pay equity in waged work — mothers are penalized.  And policy-makers’ solution for us? Get married or stay married, even if that forces us into bad relationships or staying in relationships that are abusive to us or our children.

Stop penalizing mothers, and devaluing our children!
Support the right of women to raise our own children as full time moms or to also work outside of the home.
RECOGNIZE & VALUE ALL OUR WORK, UNWAGED, LOW-WAGED. MOTHERS ARE PART OF THE 99%!

Your help and support is needed. For a start here is what I will do:

Initiated by: Global Women’s Strike; Women of Color/GWS; Every Mother is a Working Mother Network