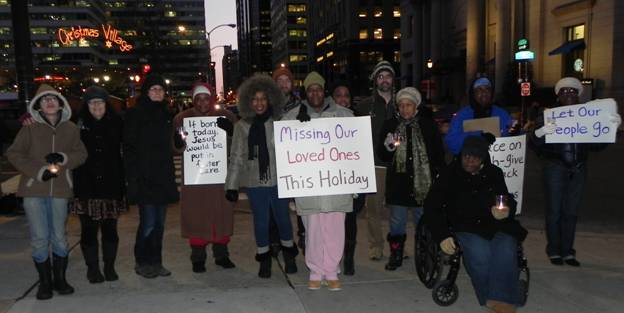 Carolyn Hill flanked by supporters as we were gathering on sidewalk in front of DHS with the city’s Christmas Village in the background.

About 20 people, mainly women of color, braved the cold to join Carolyn Hill outside the Department of Human Services in lighting candles for loved ones we are separated from this holiday season due to the foster care system, prison system, immigration policies, poverty, war…  Ms Hill’s nieces were taken from her care by DHS because she lacked a GED.  This is her second Christmas without them, and they without her. It was announced that Kimberly Rivera has been freed from prison and reunited with her newborn and family for the holidays.  But Chelsea Manning, Mumia Abu Jamal, Maroon Shoatz, the Dallas 5 (among them Andre Jacobs, Anthony Locke, Carrington Keys, Duane Peters), the CA Prisoner Hunger Strikers and many other family members who were remembered on this day with the lighting of candles remain separated from us. The candlelight vigil was covered by Channel 10 NBC Local News.

The vigil was sponsored by: DHS Give Us Back Our Children, Every Mother is a Working Mother Network, Global Women’s Strike & Women of Color in the GWS, Human Rights Coalition, and Payday men’s network. It was co-sponsored/endorsed by: AFSC Prison Watch, Pastor Antionette Johnson King Solomon Baptist Church, Artists for Recovery, Brandywine Peace Community, The Center for Returning Citizens, International Concerned Family and Friends of Mumia Abu-Jamal, Mass Incarceration Working Group of Germantown Friends Meeting, Peacehome Campaigns, Saving Our Loved Ones (SOLO), Shandre Delaney mother of Carrington Keys of the Dallas 5, Why Not Prosper, X-Offenders for Community Empowerment, and Youth Art & Self-Empowerment Project (YASP)

Karen Lee of Human Rights Coalition and Saving Our Loved Ones (SOLO) next to a holiday card that all could sign.

Speak out and Vigil outside LA Children’s Court

Organized in just a few days by DCFS Give Us Back Our Children and Every Mother is a Working Mother Network, the press conference, vigil and speak out said that dependency court secrecy puts children in danger. Among large metropolitan areas, LA County has one of the highest rates of removing children from their families, with 34% of them Black, while children needing protection don’t always get it. The same day, Dec. 18th, the Los Angeles Times carried a front page report that found fully 1/3 of children in foster care in LA County suffer abuse and some have been killed.

There was a hard fought and successful battle to end the secrecy in LA’s Dependency Court resulting in Judge Michael Nash, the Presiding Judge of LA Juvenile Court, ordering in January 2012 that Children’s Court be open to the press and public. The aim was to improve accountability and transparency. His order does protect children’s privacy by allowing minors and family members to request the court be closed to the public and press when their case is being heard. Dependency courts have been opened in over a dozen other states with no negative impacts. If the appeals court closes them, California would be the first state to re-close these courts after they’ve been opened. Dependency Court lawyers and the union representing social workers have long opposed opening the courts.

Determined to show support for keeping Children’s Court open so important decisions that impact removing children from their families are not made without public knowledge, we gathered outside the court with signs, banners and raised voices. The vigil included representatives of DCFS Give Us Back Our Children, Every Mother is a Working Mother Network, the Global Women’s Strike & Women of Color/GWS, the Womenscircle@OccupyLA and other family members whose children are being detained by LA Department of Children and Family Services (DCFS).

END_OF_DOCUMENT_TOKEN_TO_BE_REPLACED

Vigil and Speak Out

END_OF_DOCUMENT_TOKEN_TO_BE_REPLACED

This article is the second of a two-part series on charges of racial bias in the child welfare system in Philadelphia. This article is part one of a two-part series on charges of racial bias in the child welfare system in Philadelphia. Part two looks at the uphill battle fought by parents or relatives seeking to regain custody of their children.

“My nieces were removed from my care by the Phila Department of Human Services in 2012 because of racial and economic profiling and because I don’t have a GED. This is my second Christmas without them, and theirs without me. Please join me in lighting a candle for all our loved ones who are not home for the holidays.” Carolyn Hill

We invite you to endorse a candlelight vigil for families torn apart by being unjustly removed from their families by the Department of Human Services and the foster care system, prison, war, poverty, immigration policies … The vigil is being held on Wed December 18 from 4:30-5:30pm outside of the Department of Human Services.  Please come and light a candle for your loved one who is not home for the holidays and speak out about their situation.

The co-sponsorship form is below and flyer is attached.  We will send you an updated flyer with the supporters listed soon.  Thank you. END_OF_DOCUMENT_TOKEN_TO_BE_REPLACED

Join Carolyn Hill in lighting a candle for a loved one not home for the holidays because in foster care, group home, prison, solitary confinement, psych ward, juvenile or immigrant detention, nursing home, a juvenile lifer, poverty draft ….

Add your loved one’s name who is not home for the holidays in the comments here, or on the Facebook page . To endorse the vigil, please click here.
END_OF_DOCUMENT_TOKEN_TO_BE_REPLACED

Kimberly Rivera is a soldier and mother of five imprisoned for refusing to redeploy to Iraq.  Rather than grant her clemency in the last few weeks of her sentence, the military separated her son from her after she gave birth in prison last week. She has not been allowed to breastfeed or bond with her newborn.  For the latest news and what you can do, see the Free Kimberly Rivera website.

The following is a letter women at the Crossroads Women’s Center in Philadelphia (where Every Mother is a Working Mother Network is based) wrote to the Ft. Carson prison authorities:

We at the Crossroads Women’s Center in Philadelphia are shocked and outraged that a mother and child are being prevented from bonding and breastfeeding because the mother refused to harm others. This is a terrible, unnecessary, and cruel and unusual punishment for mother and baby. Breastfeeding is not an optional extra. It provides essential lifelong physical and mental health benefits. Please release Kimberly Rivera immediately so she can nurture and provide her baby with the best start in life. You are punishing caring and rewarding killing.