Luzerne County Courthouse, Wilkes-Barre, PA, hearing on motions to dismiss the charges. The start of the trial, should it go forward, has been scheduled for August 24, 2015.

The Dallas 6 are six African-American prisoners in solitary confinement in the SCI Dallas Pennsylvania prison who blew the whistle on and peacefully protested against abuse and violence by prison guards in 2010. They were charged with “rioting” and have been on trial ever since in “kids for cash” Luzerne County. 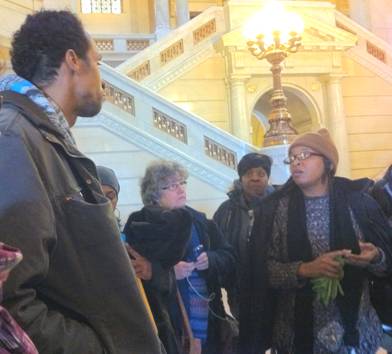 Derrick Stanley and Shandre Delaney debrief with supporters after the hearing

Testimony on the motions to dismiss the charges will now be heard on Friday March 6, as the February 19 session was spent instead on negotiating a favorable plea agreement for Carrington Keys and Anthony Locke which was upended at the last minute by Luzerne County District Attorney Stefanie J. Salavantis, drawing more attention to Dallas 6 claims of retaliation, personal vendetta and corruption. DA Salavantis has personal ties to SCI Dallas prison. Plea agreement for Derrick Stanley proceeds. Over 40 supporters packed the court. END_OF_DOCUMENT_TOKEN_TO_BE_REPLACED