For a copy of the Know Your Rights: What to do if your child is detained by DCFS handbook, see below. It will also be available in Spanish in January; call 323 276-9833 or email la@allwomencount.net 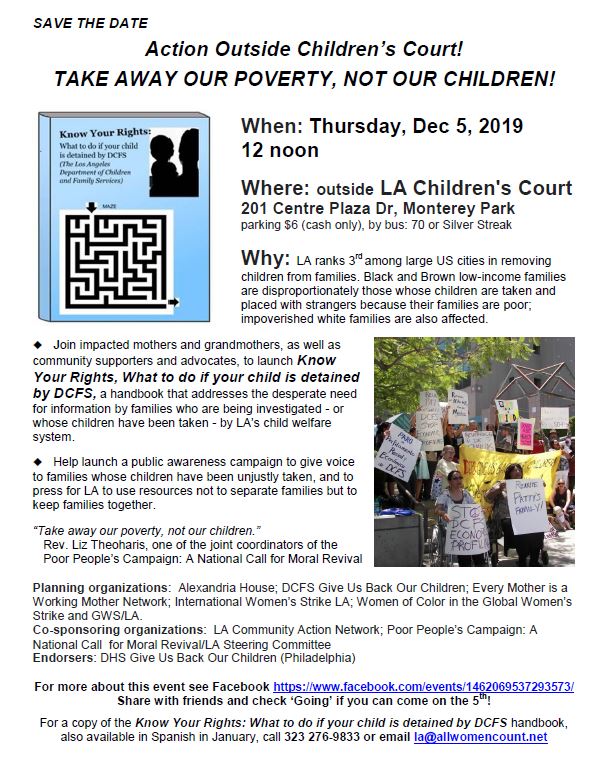 Know Your Rights: What to Do if Your Child is Detained by DCFS by EveryMotherNetwork on Scribd

Testimony from the Global Women’s Strike and Every Mother is a Working Mother Network in Support of the Community Safety and Health Amendment Act of 2019 at the Hearing of the Committee on the Judiciary and Public Safety, October 17, 2019

My name is Vanette Jordan Lumogo and we are speaking in support of the Community Safety and Health Amendment Act on behalf of the Global Women’s Strike and Every Mother is a Working Mother Network, two networks that are pressing for a care income for mothers and other caregivers as a way to tackle inequality and poverty, driving forces behind prostitution.

And my name is Phoebe Jones.  I’m a Quaker, have a PhD in physical education, and live in Philadelphia, although I was born and raised in Washington DC.  “Mothers” and “sex workers” are not often put together.  But the majority of sex workers are mothers, estimated at as high as 75-80%. This goes hand in hand with the statistic that 73-75% of the poor in the US are women and children, disproportionately women and children of color.

Prostitution is a survival strategy to deal with that poverty as well as discrimination, lack of pay equity, domestic violence, debt, high cost of living, low wages, unemployment, exploitation, homelessness and lack of support for caregiving for children and elders.  When one in 25 families in the US live on 2 dollars a day, when 20% of families are on food stamps, when welfare reform and other measures have shredded what is left of the safety net, and when single mothers are consistently the poorest, it’s not surprising that so many women faced with no or few viable alternatives resort to prostitution to survive, feed their kids, and put a roof over our heads.  It’s shocking that some women’s organizations are opposing this legislation which would stop so many low-income women from going to prison, disproportionately women of color including trans, immigrant and young women.  Where were those organizations when welfare for single mothers was being cut?  Why haven’t they been fighting for payment for the 40 million unpaid family caregivers taking care of loved ones?  We join with sex workers who say Outlaw Poverty, Not Prostitutes.