See background and what you can do to support this campaign. Please email us at philly@allwomencount.net if you would like to endorse and participate, or call 215-848-1120. We look forward to hearing from you.

TANF or welfare “reform” dismantled welfare as a right for the most impoverished families and made it into “workfare” which is a forced work program for no wages at all or below the minimum wage as a requirement to get meager welfare benefits.  This shredding of the safety net has been devastating: since its passage in 1996, extreme poverty among women-headed households has nearly tripled. 1.46 million households live on less than $2 per person per day.  16.4 million US children live in poverty, 7.4 in extreme poverty.  Nearly 17 million American children struggled with hunger in 2011, the latest number available from the U.S. Department of Agriculture.

The impact of welfare “reform” is that single mothers and their children are the fastest growing populations of homeless people are, a disproportionate percentage of whom are of color, and mothers are the fastest growing population of those who are imprisoned. With no income, with the safety net in shreds, mothers have no choice but to do what we can to feed our children.  It should be no surprise that when welfare is cut the number of single mothers arrested for prostitution increases.  Others have had to choose between homelessness and returning to an abusive partner.  If we are a victim of domestic abuse or become homeless, child welfare accuses us of failure to protect our children, detains and places them into foster care with strangers or on a fast track adoption schedule.  In fact, welfare “reform” transferred money from single mothers and our children into child welfare agencies.  The numbers of children removed from their homes and placed in foster care – especially but not only from families of color – due, not to abuse or neglect but to poverty, have skyrocketed since the passage of welfare reform. 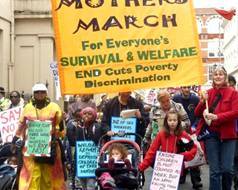 We are asking for your endorsement of a bill now in Congress: the RISE Out of Poverty (RISE) Act (H.R. 3486), by Congresswoman Gwen Moore (D-WI).   With RISE, we would finally have an opportunity to make substantial changes in welfare “reform” that would shift policy towards elimination of poverty rather than simply reducing welfare rolls.    To tackle child poverty, RISE would re-establish the entitlement of mothers – the first caregivers and child protectors – to society’s support for the work of raising the next generation and caring for entire communities.

We are also asking that you support the reintroduction of the Women’s’ Option to Raise Kids (WORK) Act which would give single mothers on welfare the right to raise their young children up to age three fulltime at home, abolishing their workfare requirements.  WORK was introduced into the last Congress by former Congressman Pete Stark of CA.

Please see the petition and call to action. We hope you agree with them and urgently lend your name and/or organization.

One thought on “Invitation to Endorse Petition to the US Government: End poverty of mothers & children. Recognize Caregiving work. Support the RISE Act (H.R. 3486) and Reintroduction of the WORK Act.”