Carolyn Hill wants her children back: appeal in court
Tuesday, August 20th 9:30am

Ms. Carolyn Hill has been struggling for over a year to get her nieces back who were removed from her care by the Philadelphia Department of Human Services. Ms Hill is Black and low-income. False claims were made about her to justify the removal of her nieces and the fact that she didn’t have a GED was a key factor that was used to say that she was not suitable to adopt the children. Finally, she has a hearing to determine if she has standing in court so she can overturn this outrageous injustice and be reunited with her girls.

All out to reunite this family
& end racial, income & education bias in the child welfare system!
Sign Petition 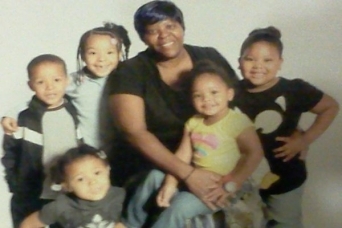 Carolyn Hill and her grandchildren

Ms. Carolyn Hill is an aunt who was caring for her nieces at the urging of DHS after her sister lost her parental rights. The children were thriving and had bonded with her, when DHS abruptly removed them, without notice or preparation. All the reasons for taking the children such as allegations about her cognitive skills and mental health issues were later proven to be false, except for one — that Hill did not have a GED. A settled family was torn apart, later acknowledged as a mistake by DHS. But far from remedying this grave error DHS has become entrenched. The children, now aged two and three, have been placed with a more distant relative who has a higher income but who puts the children in daycare 10 hours a day. Ms Hill had proven her ability to love and care for these traumatized children full-time in the home. Ms Hill is waging a tremendous struggle to get them back, with the full support of her extended family and community. Every Mother is a Working Mother is helping.